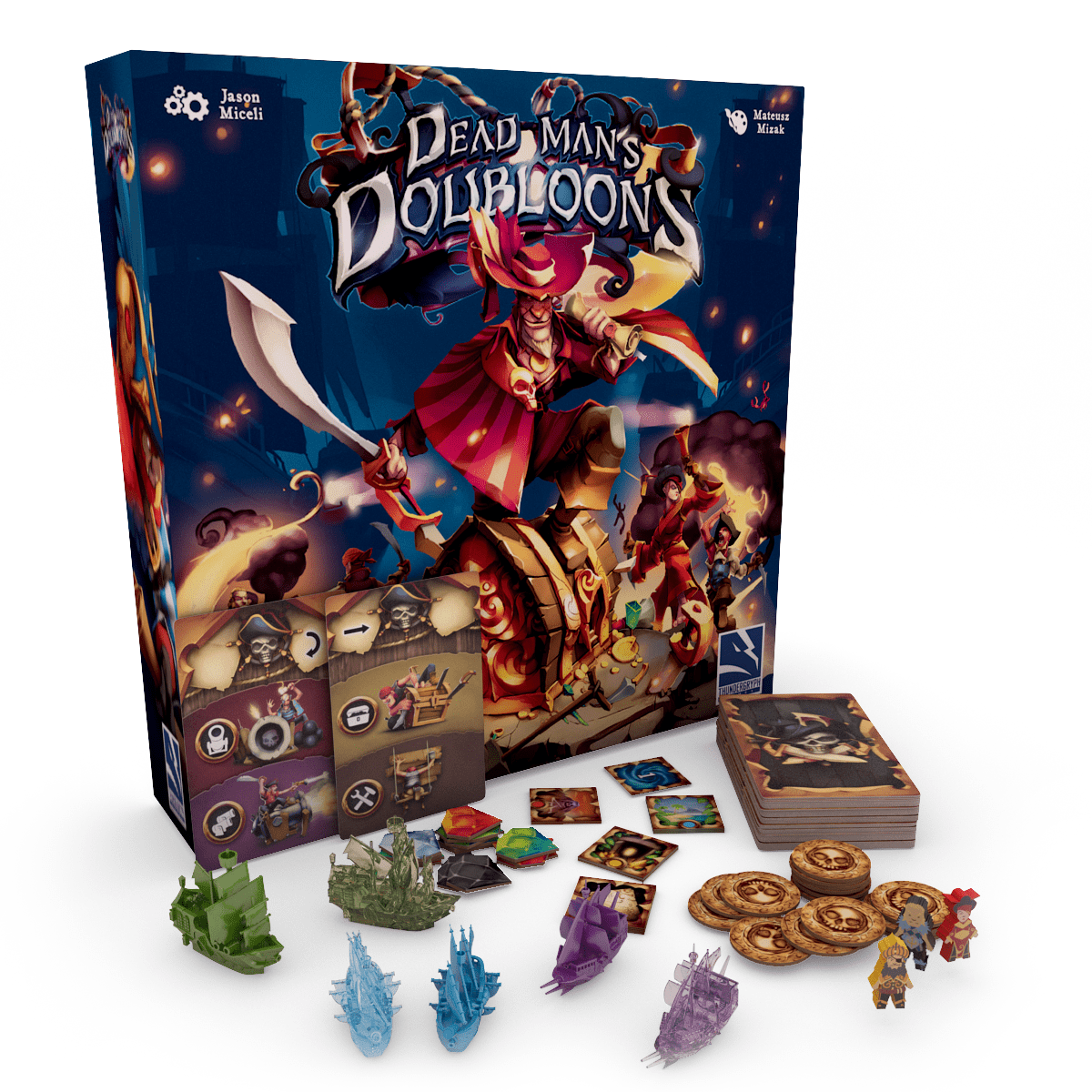 Welcome to Dead Man’s Doubloons, where players take on the role of a legendary pirate ship captain, hell-bent on winning the race to endless riches of buried treasure. Fragments of treasure maps, gold doubloons, and precious jewels can all be stolen, as can rival ships! Once the buried treasure has been dug up, ship Captains return to their vessels to engage in a final epic battle on the high seas! 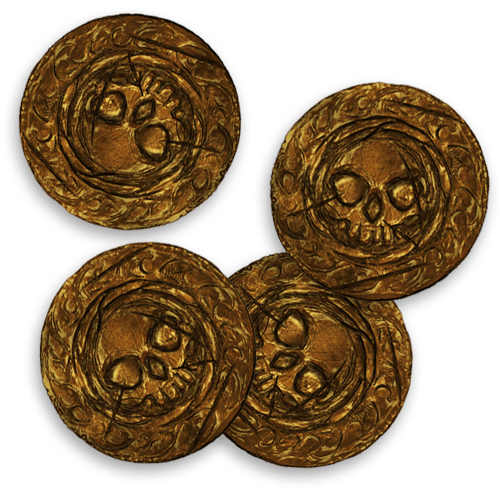 Dead Man’s Doubloons is an action-packed board game for 2 to 5 players, playable in 30 to 45 minutes.

As the game begins, pirate ships skirmish with one another while navigating the reefs surrounding the mysterious island, desperately searching for treasure map fragments and pillaging whatever they can. Meanwhile, the ships’ Captains and their landing parties follow one of several possible paths leading to the buried treasure, discovering additional riches and perilous obstacles along the way. Only the savviest of Captains will manage to locate and dig up the legendary treasure.

Having collected their precious loots, the Captains return to their vessels to engage in the final battle. Defeated vessels become ghost ships whose treasure is cursed, though with careful planning they may still emerge victorious. Once the Captains have laid waste to their enemies and exhausted their options, the game will end, and the richest Pirate is the winner!

Sinking enemy vessels is central to most pirate-themed games, but in Dead Man’s Doubloons it doesn’t end there! While attackers gain some notoriety for the deed, sunken vessels become ghost ships, endlessly haunting the waters in which they met their demise. Players maintain control of their ghost ships, and they can even still win the game, however that will not be an easy task as their treasure is cursed and worth far less. If a ghost ship player can acquire and return enough Doubloons to the island, they reform their vessel and resurrect their crew, putting them squarely back in the race to emerge victorious!

We wanted to build an exciting world to play with, that’s why each player will take on the role of a legendary pirate Captain.

“Upon the foredeck stood ‘Calico Jack’, in floral Indian Calico, like a peacock strutting his yard. Jack’s gorgeous gals in their frilled blouses and bodices lined up against the rail, brandishing sabers and their guns.”

Calico Jack is based off of the real life pirate “Calico Jack” Rackham who was famous for his outlandish Indian Calico clothing. Calico Jack is a bon vivant and ladies-man surrounding himself with beauty and charm.

Calico Jack’s ship is a sleek sloop, The William. The sloop’s bow-sprit is almost the length of the ship itself. Its single-mast is raked and lateen-rigged. The sloop was one of the fastest ships of its time owing to its lengthy bow-sprit and shallow draft.

“When the sepulchral brigantine drew nigh—its torn and tattered sails billowing in phantom wind, its dark decks scattered with bones—the merchant galley’s crew shat their breeches and leapt, howling, into the choppy waves. Better a watery grave than an eternal stint as one of Valparisa’s cursed crew!”

Valparisa is a voodoo/witch queen from the faraway Twilit Islands, so-called because the inland mountains with upward marching forests are always covered in a heavy mist. Few venture here because of the stories… witches and warlocks who dabble in dark magic and human sacrifice.

Valparisa’s ship, The Candombe, is a Brigantine. Double-masted, three sails on each mast. The bow-sprit flies three jibs.

“The Falcon on the Fjords, the Ogre of the North, the Hoary Hangman. These are just some of the epithets bad Bartholomew Voet has earned over the years. Broad shouldered, blond bearded, chest like a polar bear, Voet swings a sword in one hand and a maul in the other, his berserker buccaneers at his back.”

Bartholomeus Voet is a 15th century Norwegian pirate who plundered the Baltic Sea. He has a real Viking Soul, but Voet narcissism is stronger than keeping his beard.

Bartholomew’s ship, The Likedelere, is a dreki with a mast of gold. The hull is long and narrow, the draft is shallow, the stem is high and has the figure of a serpent’s head at the top. The ship has one mast with a square, red sail. The shields of the rowers are hung from the sides. The flag would have a firedrake upon it.

“The Widow Cheng, willowy of body, doughty of spirit, took to the seas after her husband’s death-by-poison. She exhorted her men to sever all ties with the Emperor as well as the consortium of the Red Flag. Now free of any power but her own ruthless wont, her Dragon Corp wreaks terror on the high seas.”

“She was a sapling-thin woman of sleepy eyes and caries-riddled smile. Her oiled hair shone brighter than her eyes.”Jorge Luis Borges

Widow Cheng is also based off of a real-life pirate queen. She is an ex-prostitute from one of the floating Canton brothels who was taken aboard for her beauty. After the betrayal of her husband, she has taken over control of his fleet. She is equal parts organizer, administrator, and fearless battle commander.

Widow Cheng’s ship is a junk. Three masts with batten sails. Eight cannons in their embrasures.

“The oars of the Razzias dipped silently into the sea, pulled by four score scurvy slaves, the survivors of raids along the Iberian coast. The turbaned corsairs swarmed atop the deck, brandishing wicked curved scimitars. Their captain Hayreddin stood at the wheel and stared down the long nose of his monocle at the enemy’s ship.”

Hayreddin is based off of a real pirate-come- agent of the Ottoma Sultan. Hayreddin is from the island of Lisbos where the hidden pirate city of Bougie can be found.

Hayreddin’s ship, The Razzias, is a xebec. A xebec has an overhanging bow and stern. The deck is slender, but with a high superstructure. The flag could be red with a stylized scimitar. The xebec is principally operated by rowers, historically, Christian slaves from the Iberian coast.

We will release the next captains and more information about the game in the upcoming days!
Every time we release information, you will be able to get more entries for our contest!