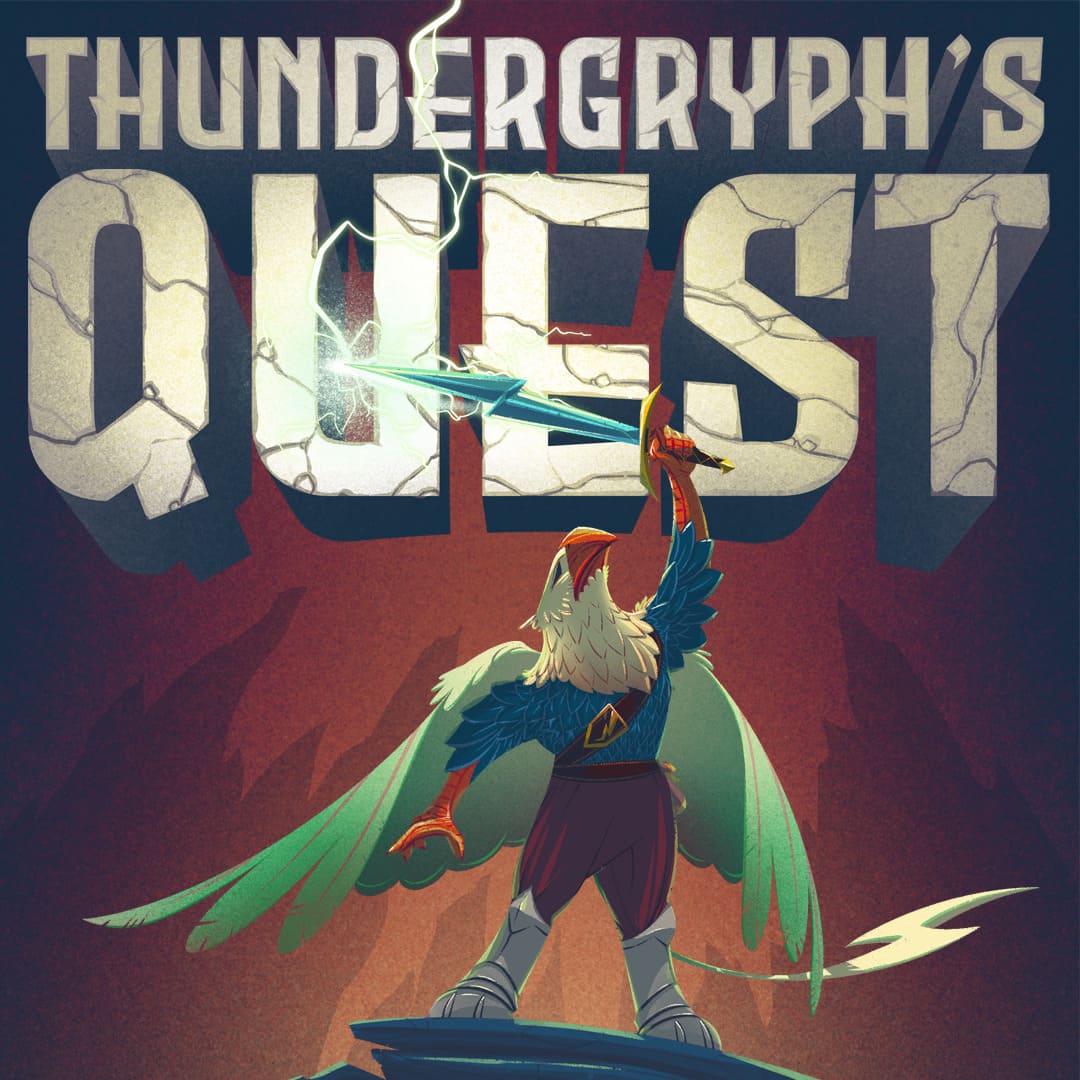 This is a cooperative narrative adventure, only the most voted choice will be pursued. 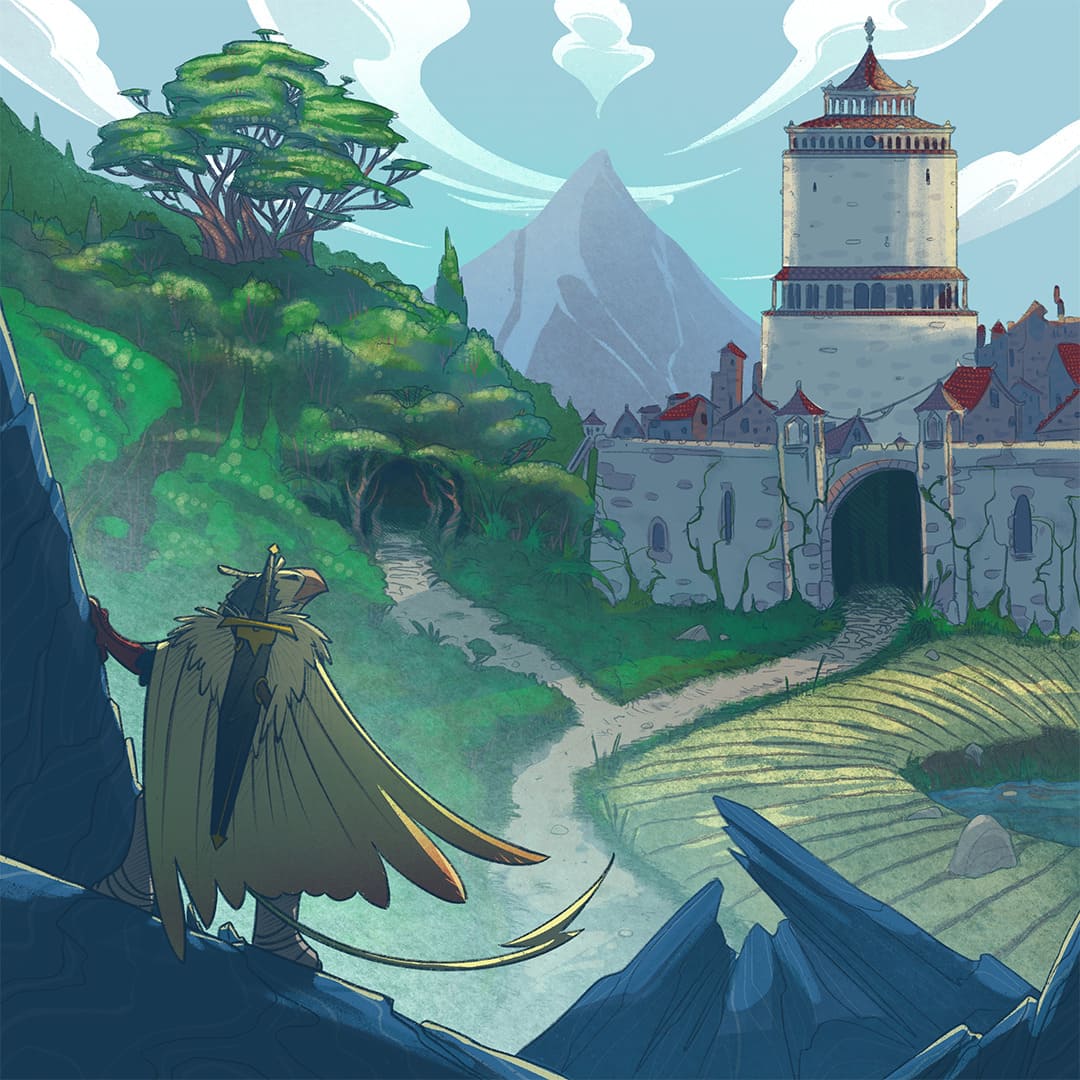 Gryphy heard a distant voice, was it a song or a lament? Wandering to find the source, it encounters two different paths: the village or the forest. 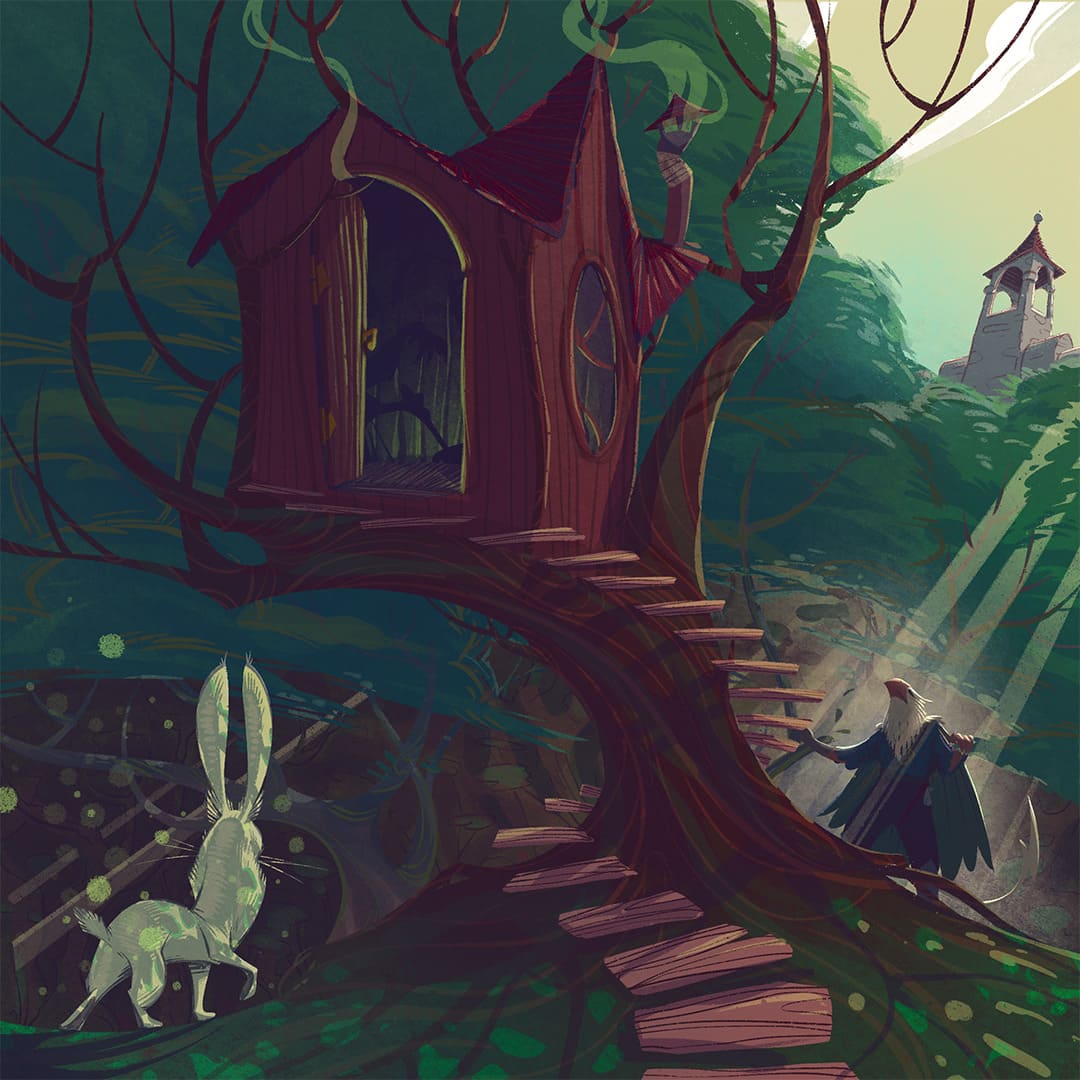 Gryphy found the source of the voice! There is a singing voice coming from a small wooden house, with its door open. Wait! For a moment Gryphy spots something shiny out of the corner of its eye, a rabbit! And it’s running away! 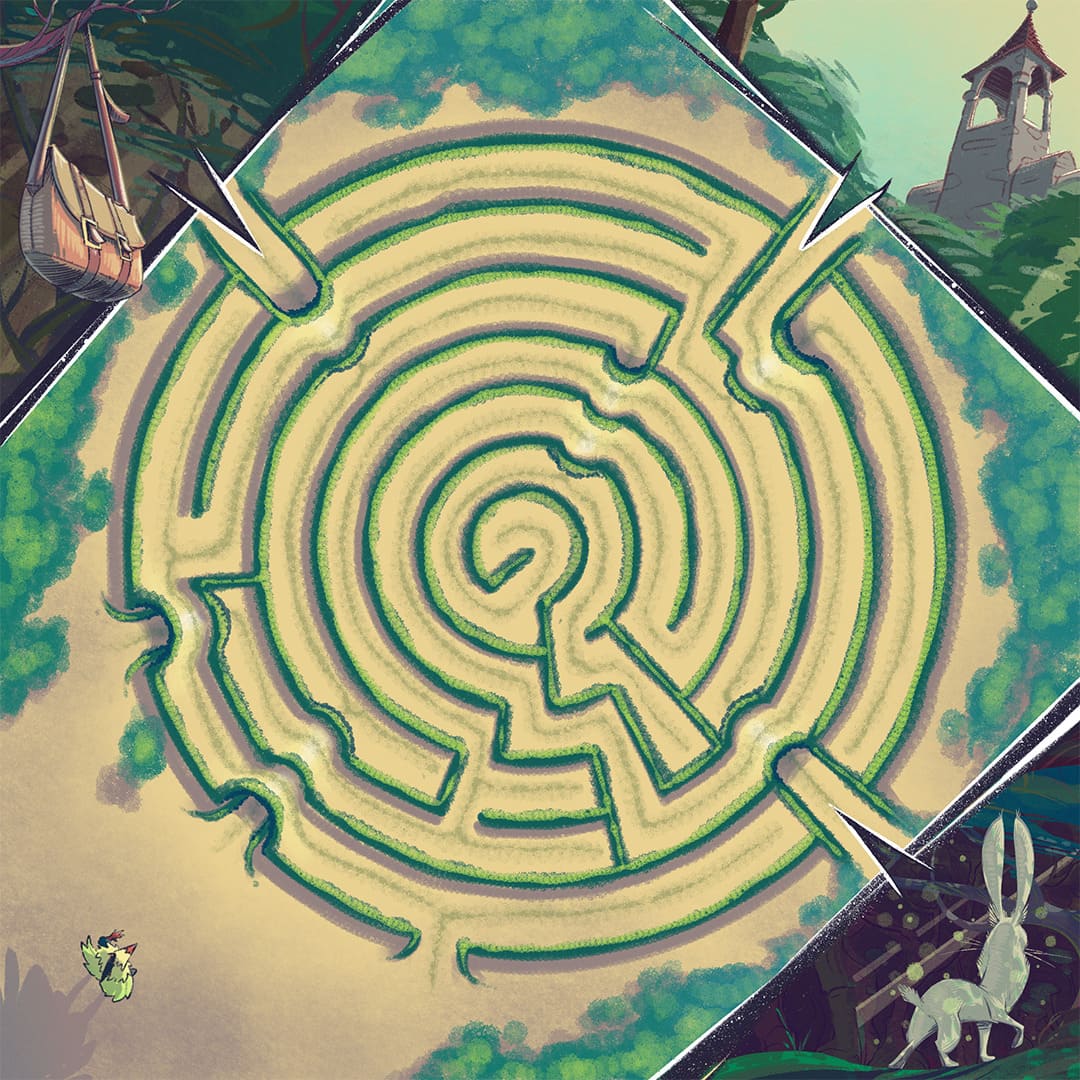 Gryphy is exhausted after chasing the shiny rabbit for hours, unable to catch it. In need of some rest Gryphy takes a look around, the rabbit led to a labyrinth! Now Gryphy will need to decide which path to take. It would be a wise decision to rest for a while before deciding which path of the labyrinth to take. 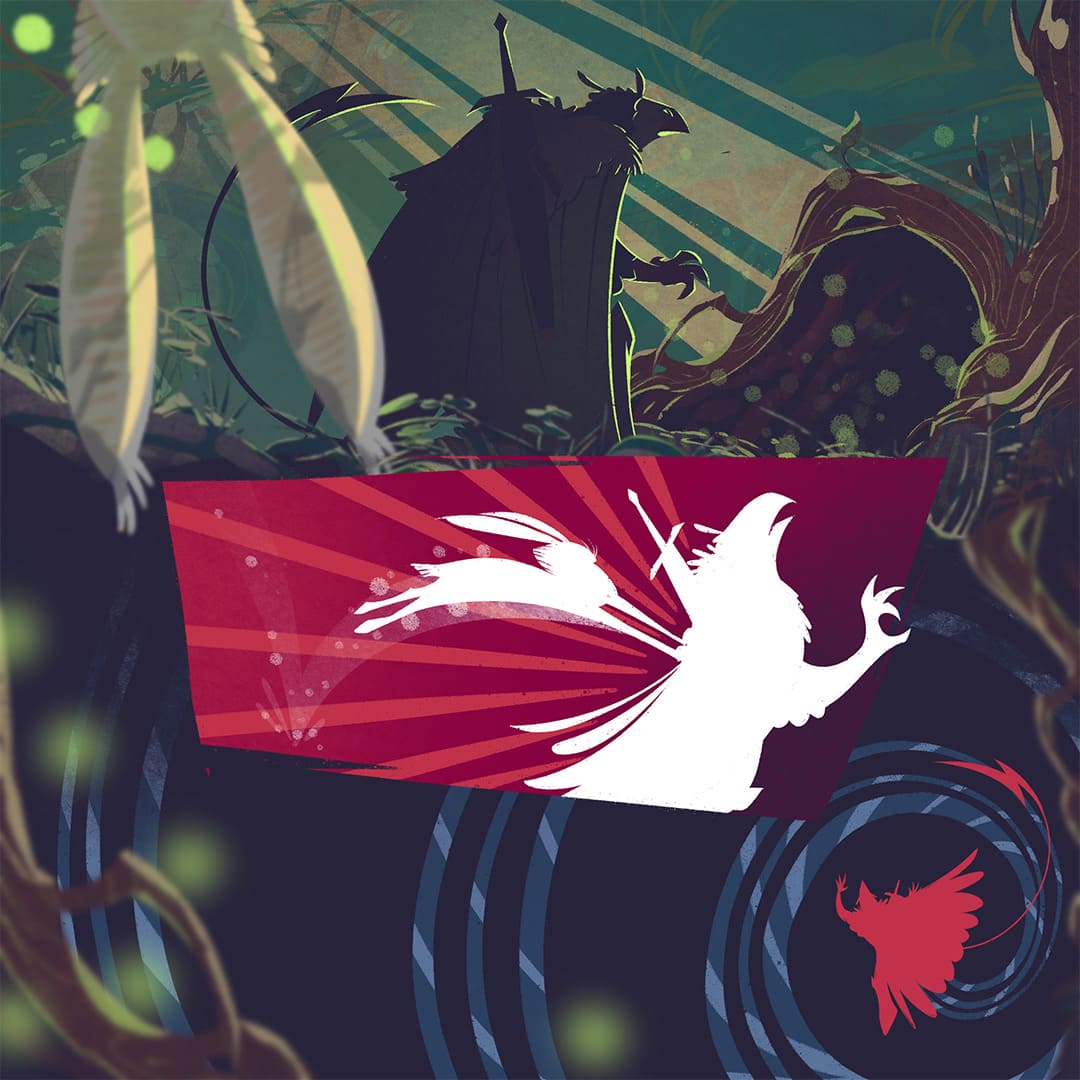 Gryphy emerges from the labyrinth and finally spots the shiny rabbits den. Excited about what could be uncovered, Gryphy leans towards the burrow when suddenly the rabbit - furious of always being followed - emerges from the thicket and pushes Gryphy in, who begins to fall further and further into what seems to be a strange interdimensional portal. Would this be the end? 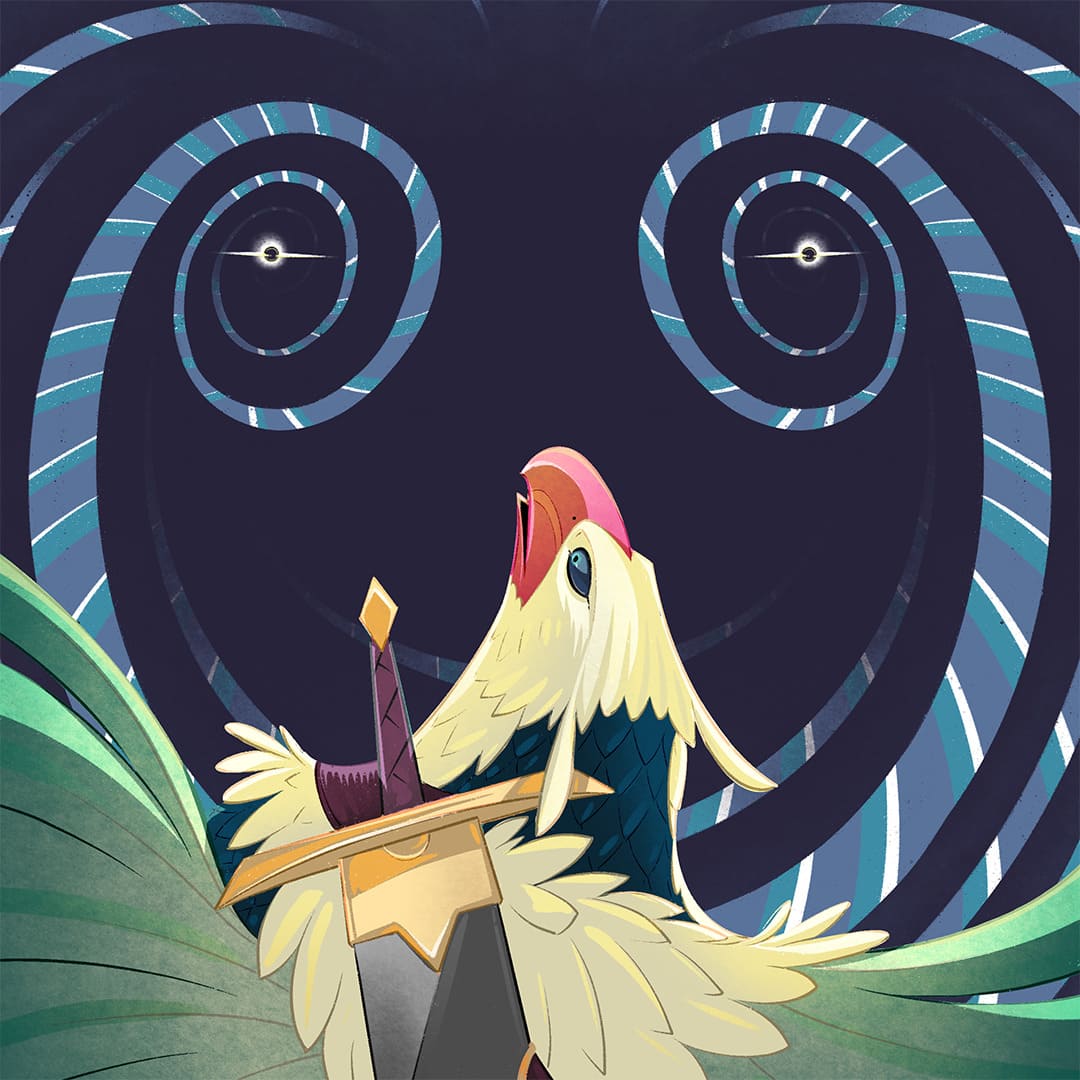 Gryphy regains consciousness, the dots start to connect. Gryphy is underground, everything is pitch black and Gryphy is.. floating?! Could this be the rabbit hole? There’s no gravity. Gryphy can’t feel the weight of time either. 𝘔𝘪𝘳𝘳𝘰𝘳𝘦𝘥 wormholes in the distance.. Pushed by intuition, Gryphy knows that somehow the routes are two: the past, or future. The present is already gone. 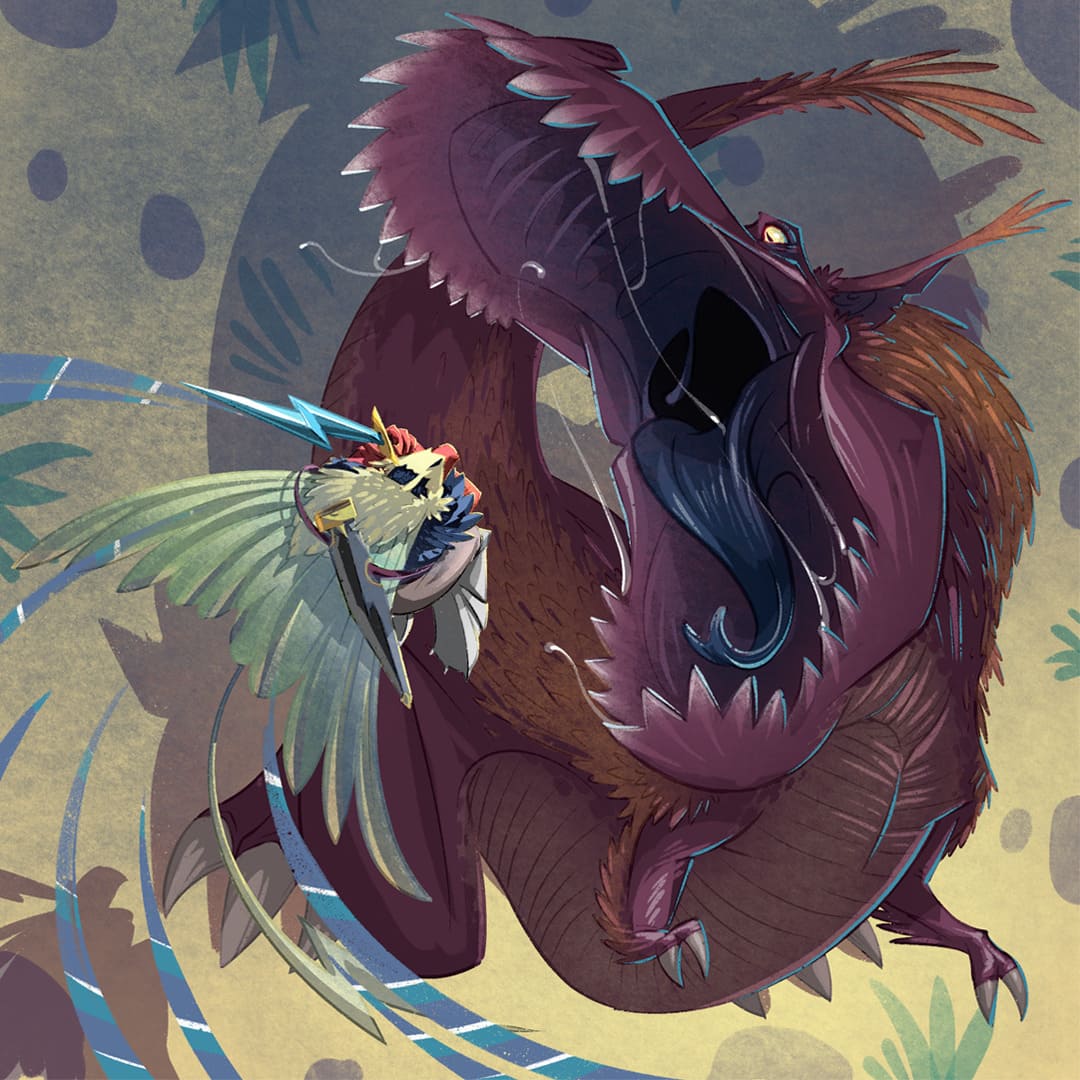 Gryphy moved to the right, only to find out that the wormholes were mirrored! Gryphy suddenly got dragged and thrown into the past arriving face to face with a huge dinosaur looking for a tasty snack! Help Gryphy!
The dinosaur has unique 3 weak spots: the eyes, mouth and heart. 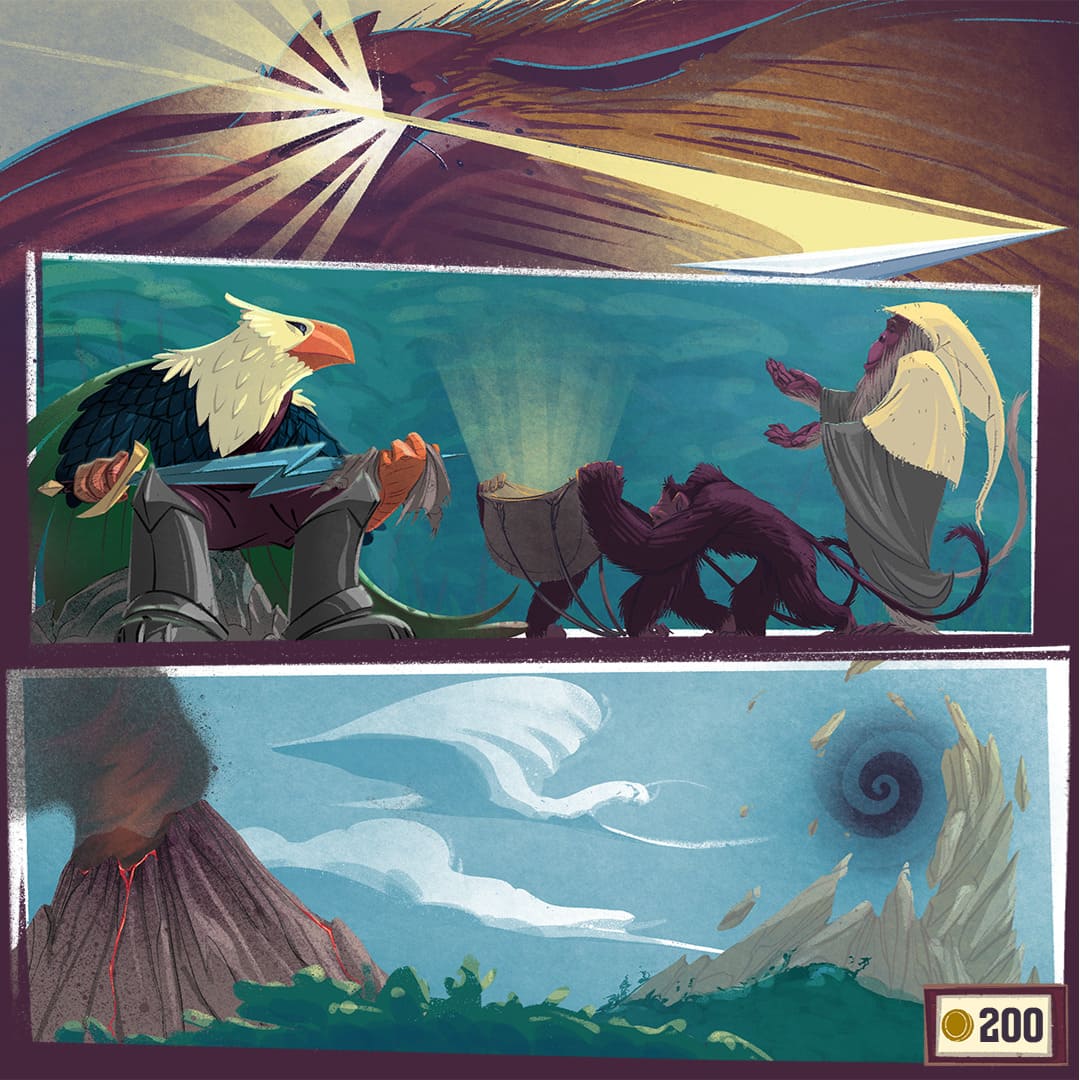 That was close! The effort paid off and after an excruciating fight Gryphy hit the dinosaur in the eye, and the dinosaur fled the village! The monkey inhabitants of the land that were long threatened by the dinosaur are safe now. Primum, the leader of the Monkey village, hands Gryphy 200 gold coins as a sign of gratitude. Gryphy is relieved and free to decide where the adventure will continue. 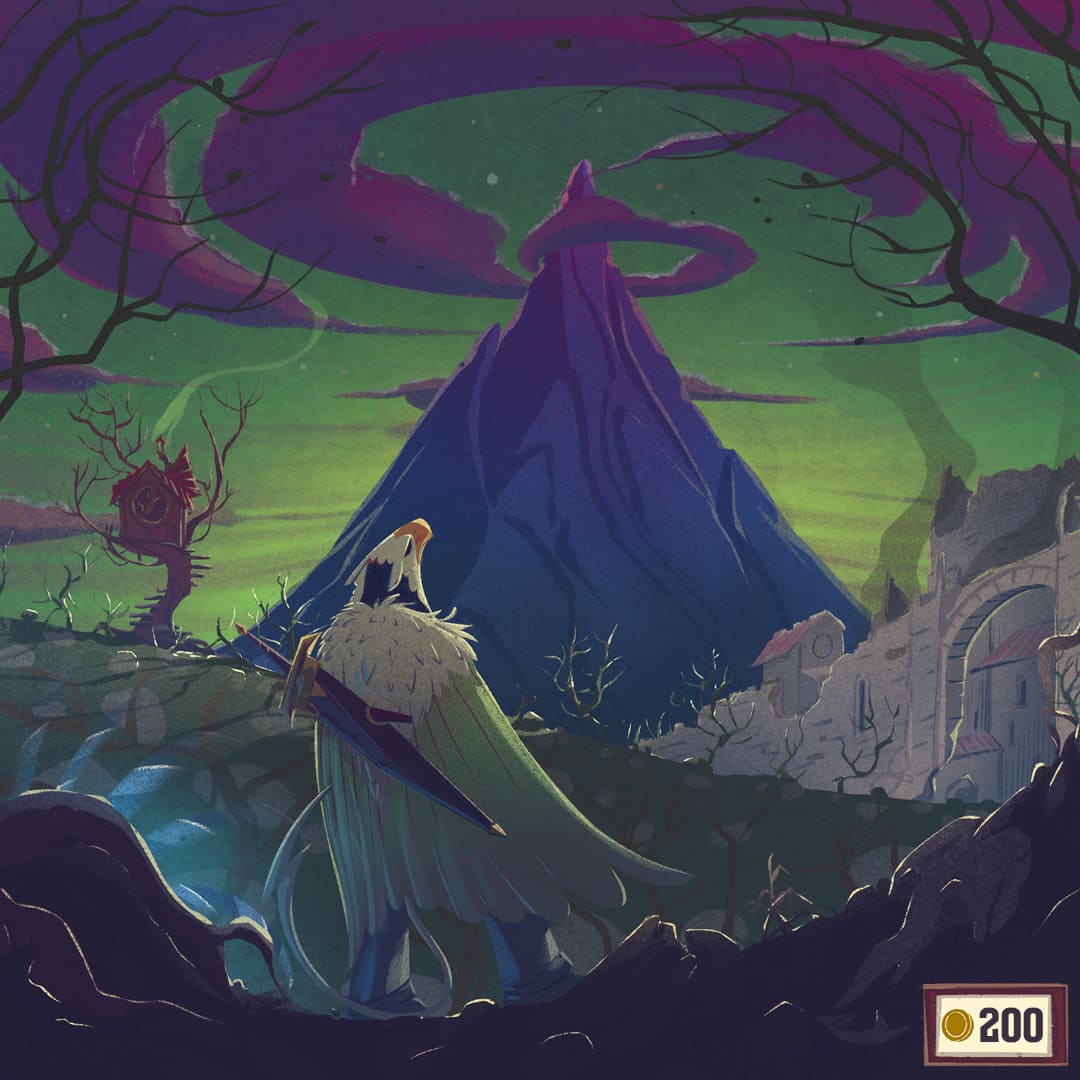 After such an arduous time spent in the prehistoric times, Gryphy gathers up his 200 coins and heads back to the present hoping to find a refreshing and familiar place. Gryphy is shocked!. The Forest is no longer thriving, the bushes are dry and weak. The Labyrinth is gone, and the Village perimeter is destroyed. Gryphy notices a green smoke rising from the mysterious tree house where the singing voice was once coming from. And the Village seems to be surrounded by a purple cloud. Where should Gryphy head next? 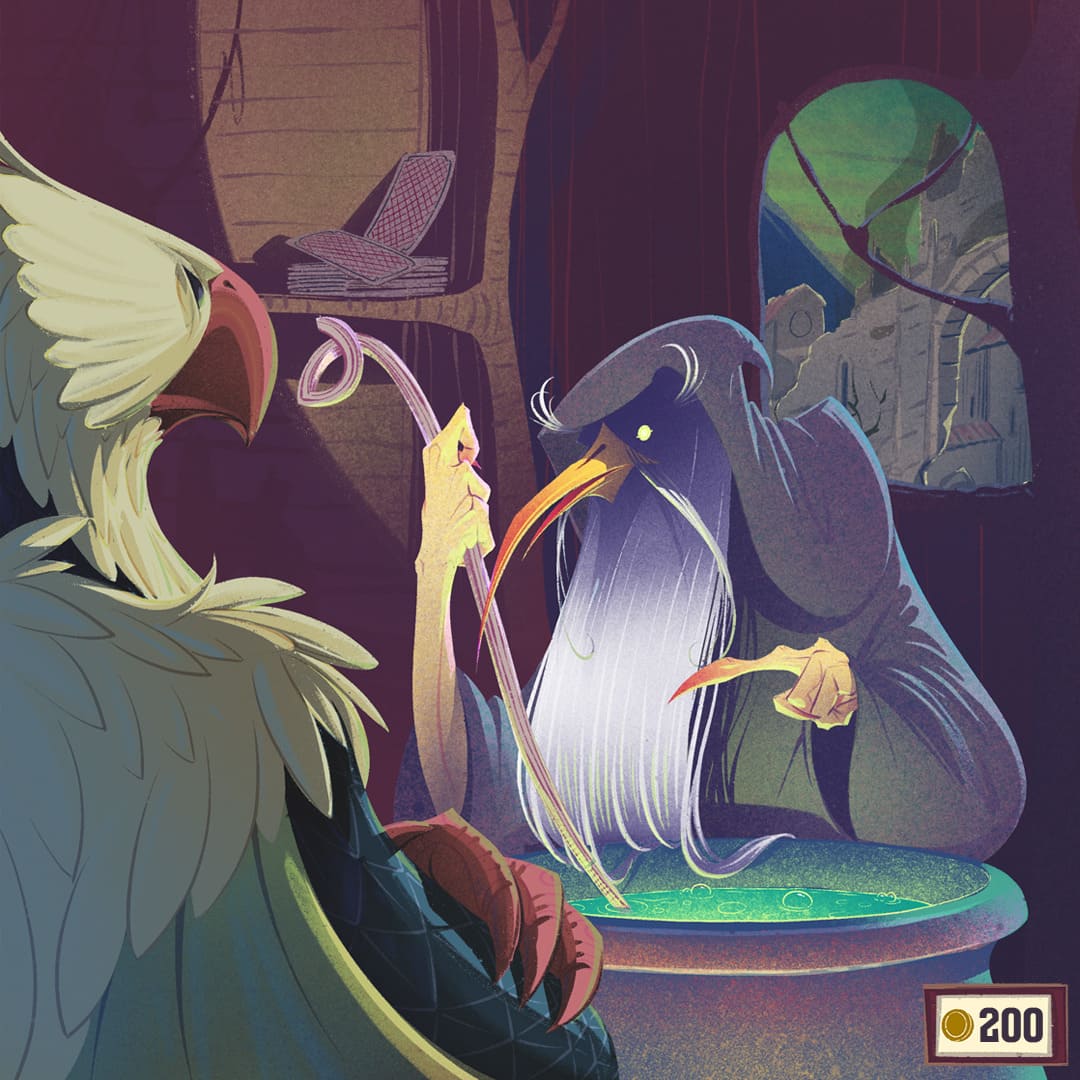 Gryphy climbs up the treehouse to find an odd wizard brewing a potion. The wizard is resentful of Gryphy, who chased the rabbit instead of following the wizard’s chanting in the treehouse, which would have avoided the cataclysm. Gryphy asks for clarifications but it is too dangerous to leave the yet unstable potion unattended. The wizard won’t give explanations unless Gryphy brings the missing component to stabilize the potion: an orchid root that only the herbalist has.