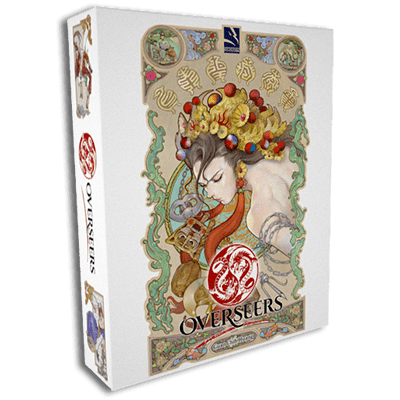 Overseers is a fast-paced drafting and bluffing game with a twist.

Each player represents an Overseer, whose objectives are to bend traits at their favour to create the most dominant combination of virtues and vices; you will draft cards to achieve the best possible score and try todeceive your way during the game to convince the others you are not the strongest player.

Join our contest to win one KickStarter game version  of  Overseers!

Will be a good addition to my collection!!

Let the battle for the free copy commence. I look forward to the trophy gracing my collection

I cant wait to get this game on my hands!! loooks like a game to play anywhere!

This game took me by surprise, looks a lot of fun and hopefully we can add more overseers!

Drawn by the art, stayed for the game…. and now hoping to win an extra copy so I can spread it to my other friends! 😀

Backing the KS… looks like this is a pretty cool game

Beautiful game, and I have come to really enjoy drafting games. Looking forward to getting my Kickstarter copy, and hope I can win one for a friend!

Good luck to everyone.
The game will be awesome and seems to be very interesting.

I am a backer on Kickstarter who is very much looking forward to the game.

Hoping to win another copy!

Think this is a good game 😀

Beautiful art and the gameplay appeals because my gaming group love nothing more than accusing each other of being in the lead.

This game looks amazing. Definitely looking forward to adding it to my collection!

Very exciting looking game! Can’t wait to hold it in my hands!

If i win I will give this copy to some friends, since i backed another copy at Kickstarter! Great Game!

Thanks for the contest 🙂

Very excited to have this game in m,y hands!!

Very happy to play this on tabletopia and can’t wait to it hits my table for real.

Good luck with the Kickstarter!

Woohoo, cant wait for the game!

A very nice looking game. It looks like a lot of fun

My household is obsessed with tabletop & card games, so we can’t wait to try this one!

Looks like an interesting game. Curious to see what Thundergryph has planned for future.

Thanks so much for the contest! Game looks fantastic!

This would give me a copy for christmas presents!!

I pledged a few days ago, the game looks like a ton of fun and I can’t wait to try it out!

I hope this goes globally 🙂

Can’t wait to try this one! Here’s hoping to win a copy 😀

If I don’t win it, I’m gonna buy it a anyway

Looks beautiful! Looking forward to checking this out one way or another 😉

The game looks really good. Thanks for the contest!!

The art is stunning.

Can’t wait to try it!

0
Reply
wpDiscuz
90
0
Would love your thoughts, please comment.x
()
x
| Reply
We use cookies to ensure that we give you the best experience on our website. If you continue to use this site we will assume that you are happy with it.OkPrivacy Policy