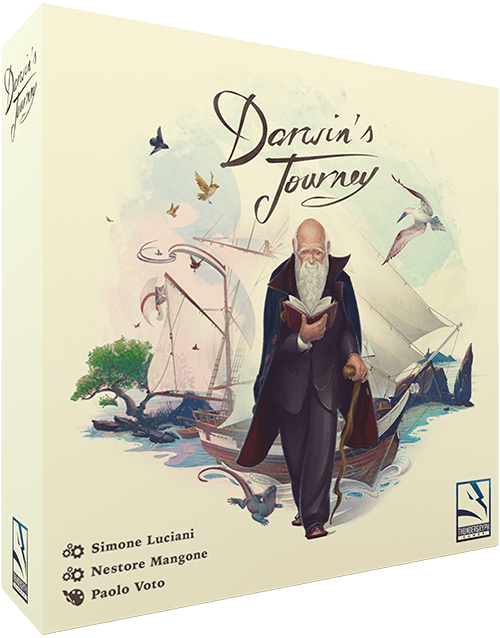 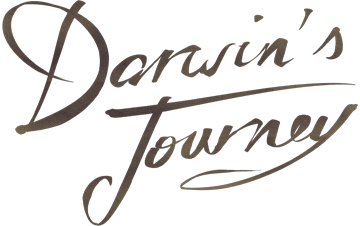 Back now on kickstarter

When interminably, all you can identify in the horizon is the line that detaches the sea from the sky, the glimpse of a distant shore seemingly appearing before you will make you shiver at the understanding that the adventure is about to begin.

An exploration through the Galapagos, a magic place of inconceivable beauty and endless biodiversity, where you will gather repertoires and expand your knowledge of the natural sciences.

After inspiring hours spent studying and getting to enlightening conclusions, you will rest under a sparkling sky, admiring the stunning complexity of the animal realm.

Darwin’s Journey is a worker placement euro game by the award winning Simone Luciani and Nestore Mangone. Players recall Charles Darwin’s memories of his adventure through the Galapagos islands, which contributed to the development of his theory of evolution.

With an innovative worker progression system, each worker will have to study the disciplines that are a prerequisite to perform several actions in the game, such as: exploration, correspondence, gathering and dispatch of repertoires found in the island to museums in order to contribute to the human knowledge of biology.

The game lasts 5 rounds, and with several short and long term objectives every action you take will grant victory points in different ways. The tension and strategic planning that increases over the duration of the match and the fascinating vibe that the game conveys, makes Darwin’s Journey one of the most ambitious projects that Thundergryph have crafted in its story as a board game publisher. 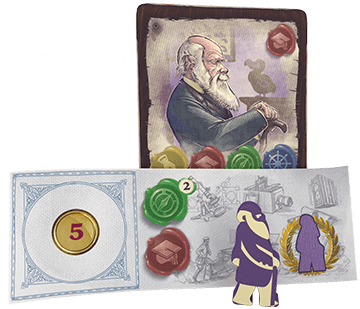 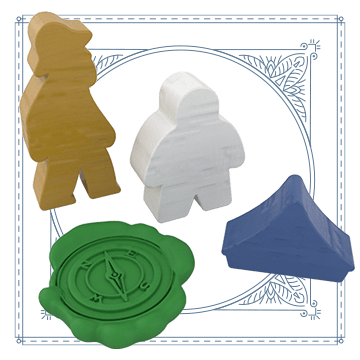 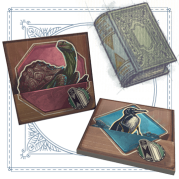 Museum and the theory of evolution 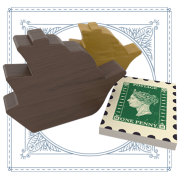 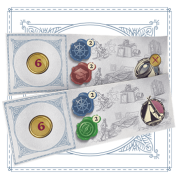 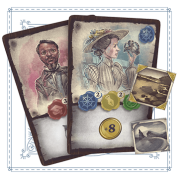 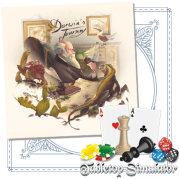 Win a copy of Darwin's Journey

In Darwin’s Journey most of the actions that can be performed are bound to requirements that your workers can learn by attending the Academy. The more complex the action, the more difficult  the necessary requirements will be. 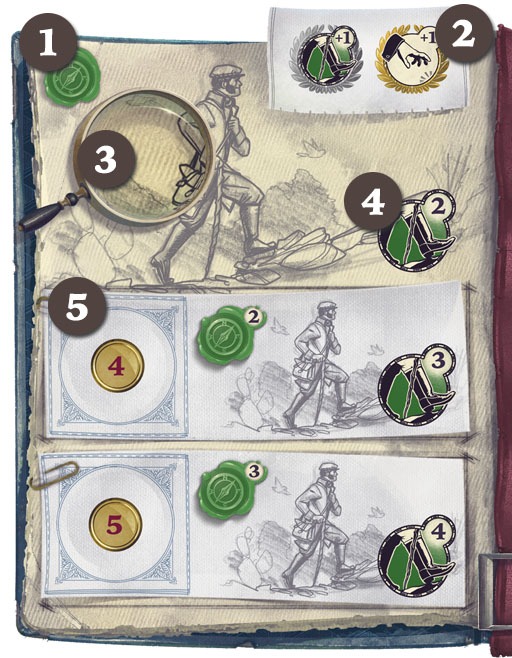 There are 4 different types of wax seals that can be assigned to workers that are linked to the main actions in the game: Exploration, Navigation, Correspondence and Learning. 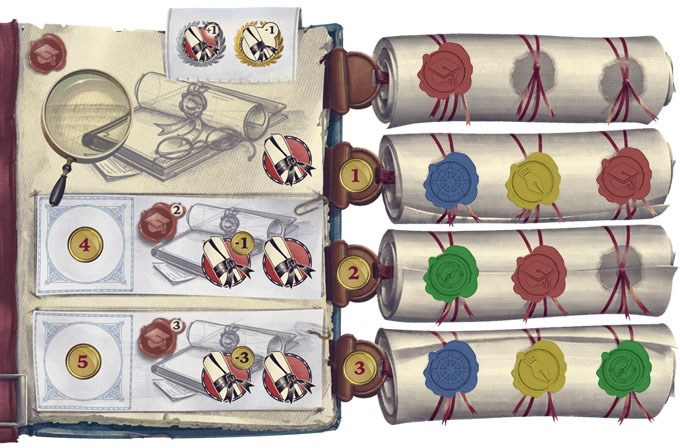 Expanding the knowledge of your workers will also grant victory points and increase  bonuses when performing actions.

One of the main actions is exploring the Galapagos by advancing with your explorers in one of the different islands. The first island is unlocked immediately, while the second and third will be bound to how far your ship advances with the Navigation.

On the islands, your explorers will find three different types of events:

Finding Repertoires: You will be able to discover and take notes on your player board, finding one of the 16 different repertoires available divided in four categories: reptiles, fossils, plants and birds. These discoveries will be shared with the museum which will grant coins and advancement in the Theory of Evolution track.

Placing Tents: When visiting a camp site, you will be able to place one of your tents on the island, unlocking immediate bonus actions and extra perks that can be found on the player boards and that should be taken immediately depending on which tent is being placed. 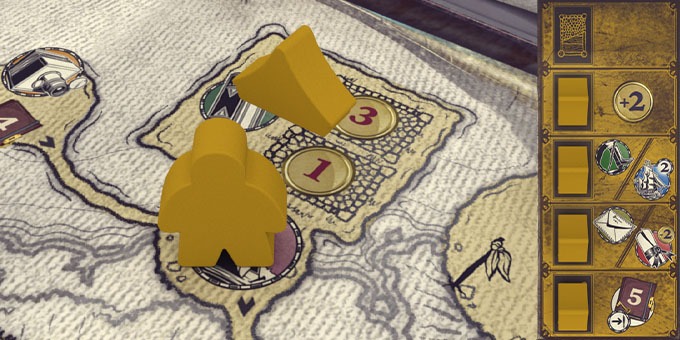 Bonuses: You will also be able to receive other bonuses like: immediate actions, coins, and wilds which can be used to pay for requirements in order to perform an action that your workers don’t have. 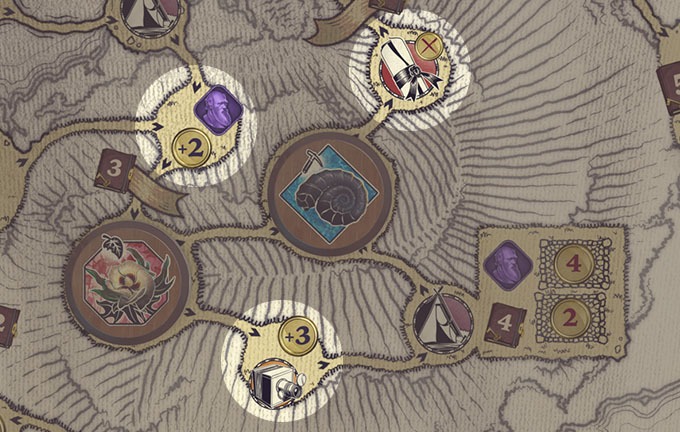 Adventure and exploration are vivid and engaging as we trace back Darwin’s Memories through many of his discoveries in the Galapagos islands, which heavily contributed to his Theory of Evolution.

By exploring the island and navigating through the ocean, we will find new incredible species and take notes of our discoveries.

Once we are ready to share our discoveries with the world, we will be able to send repertories to the Museum by placing our worker in the corresponding field of the game board. This is an open action that any player can perform during the game and allows to send up to two repertories per time, to the museum. The first one is free, while the second one will cost 3 coins.

Money is definitely the most difficult element to manage in the game, but will drastically improve the tempo and the quantity of workers used to accomplish a long term strategy.

Only one player can send a unique repertoire to the museum, and by doing so, they will get two different types of benefits, taking into account both the column and the row where the repertoire is placed. 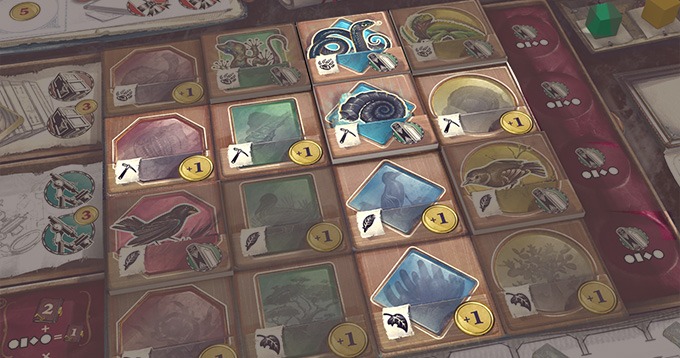 Image example: By sending the “Amonite” to the Museum, the player will immediately get a total of 5 coins + 1 extra for being the first repertoire of the row and an advancement in the evolution track.

This interesting balance of coins and evolution points will change drastically as the game approaches the end; since at the beginning players will get more coins, and towards the end more evolution points.

By advancing towards the Evolution track, we will be able to increase the multiplier of the final scoring Theory of evolution, which consists in 2 points + 1 point for every completely filled row at the museum. This is one of the most important sources of victory points in the game and you should always keep track of how the other players are doing.

Another type of mechanism that really makes the game breath is the Navigation, which not only is fundamental to reach more interesting islands with your explorers but also because it will create a tense race to complete each turn’s objective.

During setup, players will place 5 Beagle objectives (one for each turn) that will immediately set short term strategies for each round. Some of the strategies could be: having wax seals of a certain color, completing certain objectives, or finding a particular type of repertoire.

By performing a Navigation action, players will be able to advance with the ship to discover new repertoires, find places for camping ashore and avoid point deduction when  your ship doesn’t keep the pace of the Beagle advancing.

Correspondence changes in each game, creating an animated competition that will reward the first and second player that hold the majority, with special end of round bonuses.

These rewards can go from coins, to discounted wax seals or advancement towards the island of your choice. 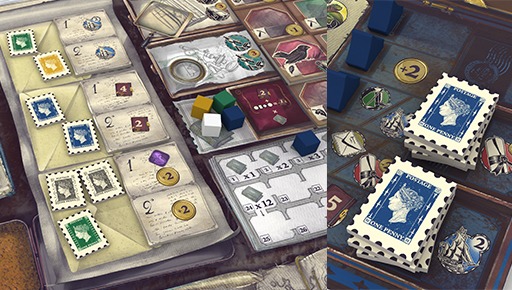 By advancing towards the Evolution track, we will be able to increase the multiplier of the final scoring Theory of evolution, which consists in 2 points + 1 point for every completely filled row at the museum. This is one of the most important sources of victory points in the game and you should always keep track of how the other players are doing.

So far we have been covering all of the General Actions in Darwin’s Journey. This time around we will be covering Special Actions. In Darwin’s Journey, unlocking new actions by placing your personal lenses is among the most satisfying things to do. 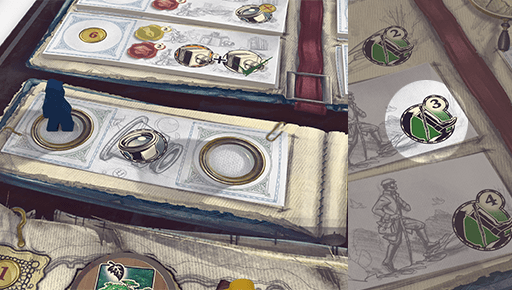 By visiting the corresponding diary, players will be able to pay the cost of any locked action in order to make it available to everyone. By doing this, the player will immediately perform the unlocked action for free, without the need of a worker or to meet the requirements of that specific action.

Along with several improvements to the actions that we have already touched on and know, we have 6 Special actions that are randomly drawn during setup, that will completely change the pace and the strategy of your games. 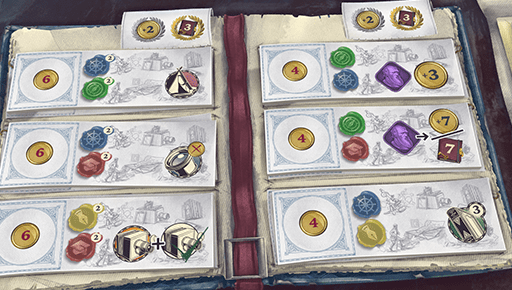 These actions can give access to a variety of things, such as: placing tents, drawing and immediately completing objectives, or using locked actions in the game.

By subscribing to the notification that will remind you every time we go live, you will obtain a Special Action that is very fun to play: Darwin’s Action. By performing Darwin’s Action, players will be able to get Darwin’s meeple for a single use. The most interesting aspect about this piece is that this meeple can perform any available action, always getting the best improvements, as it is an expert worker.

For the last gameplay reveal of Darwin’s Journey, we will talk about the Crew card and the Personal Objectives.

We have seen that the Beagle Objective is a single short term objective that expires after a game round. Personal Objectives and Crew cards will definitely need a bit more thought to be completed.

Players start with two Personal Objectives and will be able obtain more during the game by visiting the Objectives section.

Once an objective is completed, players will be able to place them on their Personal board to unlock one time bonuses and ongoing advantages for the entire game, like avoiding the payment of certain tasks, unlocking a new Worker or to getting a great amount of victory points.

Crew cards, instead, will be drafted during setup and will be an important part of the strategy structure, which will require much more planning.

With 16 Crew cards included in the base game, strategies will change depending on the draft. You will be able to find more characters during our Kickstarter campaign and you can get Darwin’s character card if you subscribe to our campaign launch reminder! 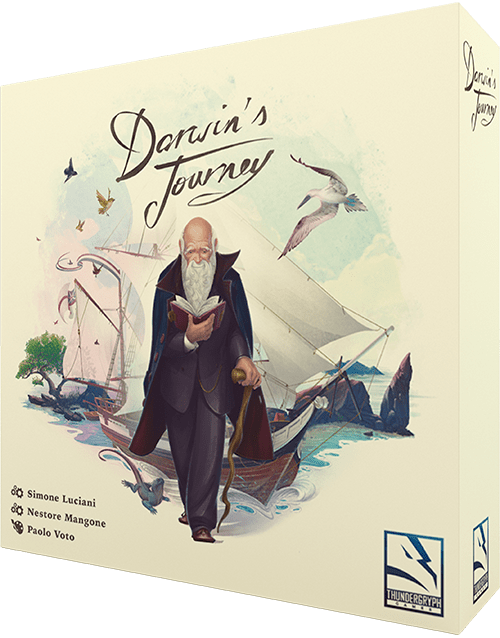 Looks awesome and can’t wait. But it is seriously going to need player guide cards for all the symbiology. Will overwhelm people.

Hello, I can find the possibility to change language in german.
Can you help me.

Was this really only on Kickstarter for ten days? I just found out about it, and it looks amazing!

There is no review that I can find of Solo play which I believe it has. Particularly given Covid solo play is increasing in importance so how about a video review of solo play

They plan to do it today for 2 players. And soon for solo. Follow the KS.

Would love to hear how it compares to “On the Origin of species” game!

I saw rahdo’s run thru and I adore this one!

Really looking forward to this one!!

You had me at Simone Luciani!

Will be in Spanish?

Looking forward to see it on my shelf

Wow! This look so amazing!

Really anticipating the launch of the KS.

Heard about it from Thinker Themer on Youtube…can’t wait to back it!

I’m so thrilled for this game! I tried it on TTS and… oh boy! Fell in love with it! Wonderful games and gorgeous looking! But I really hope to see LOTS of playmats! Gon, don’t let me down! 😁

Can’t wait for the campaign to go live!

Really looking forward to this KS!

This game looks amazing! I just know my husband will love the science behind it!

I am looking forward to it

Love Thundergryph games. Looking forward to this one.

Does the game work good with 2 players?

so looking forward to this!

I love Darwin and his theories.

The visual design is outstanding – very evocative. I am a little concerned about whether the gameplay will be intuitive or not, looking at the big board with all the action spaces. I’ve included a mockup of what I think might feel better when playing but hey, just a suggestion 🙂 I love Darwin’s Journey any way and can’t wait to explore! 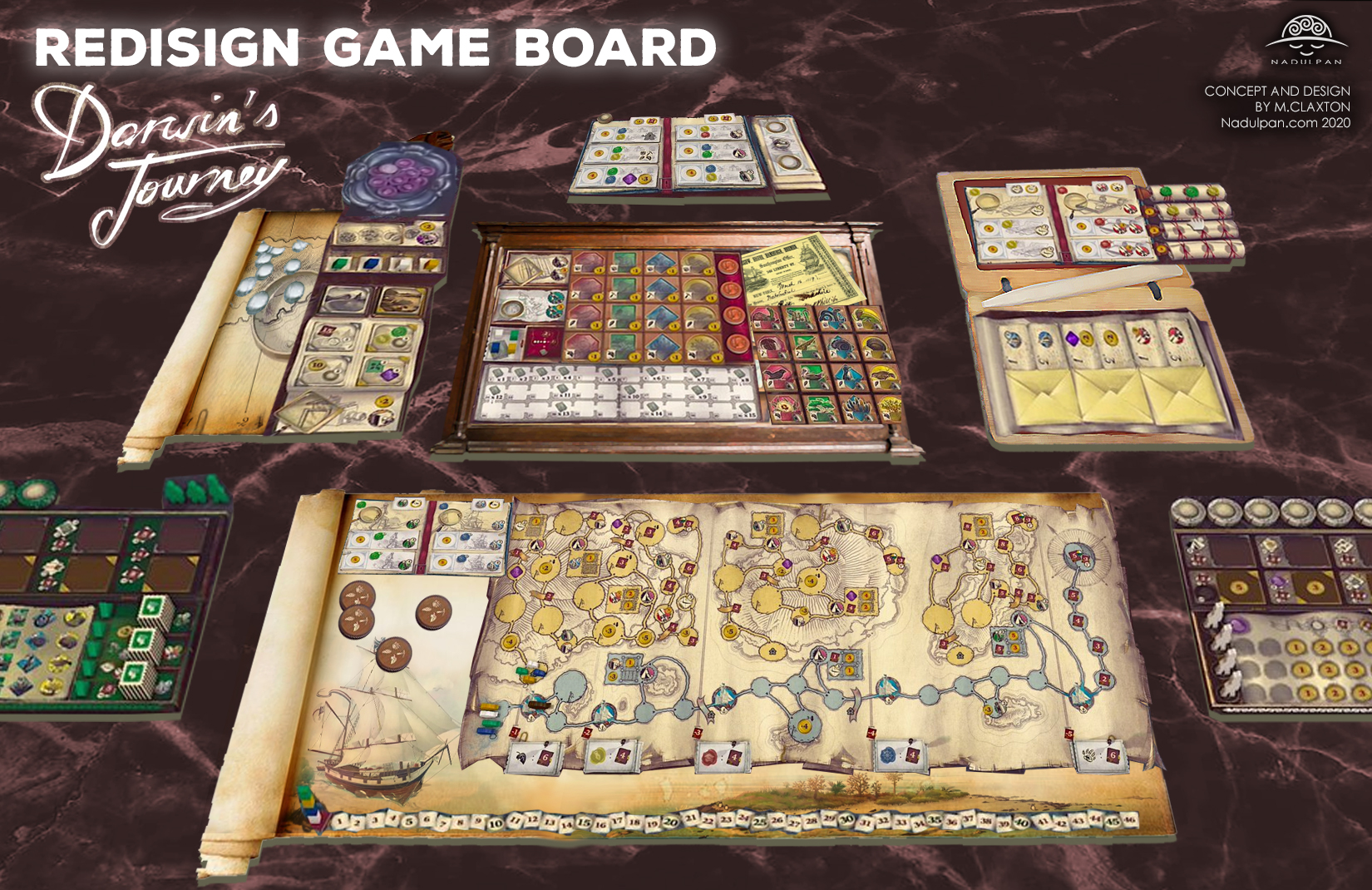 Looking forward to this game.

Looks great !
The components do not seem to have any text, so do you have any plan to translate the rulebook to other languages ?