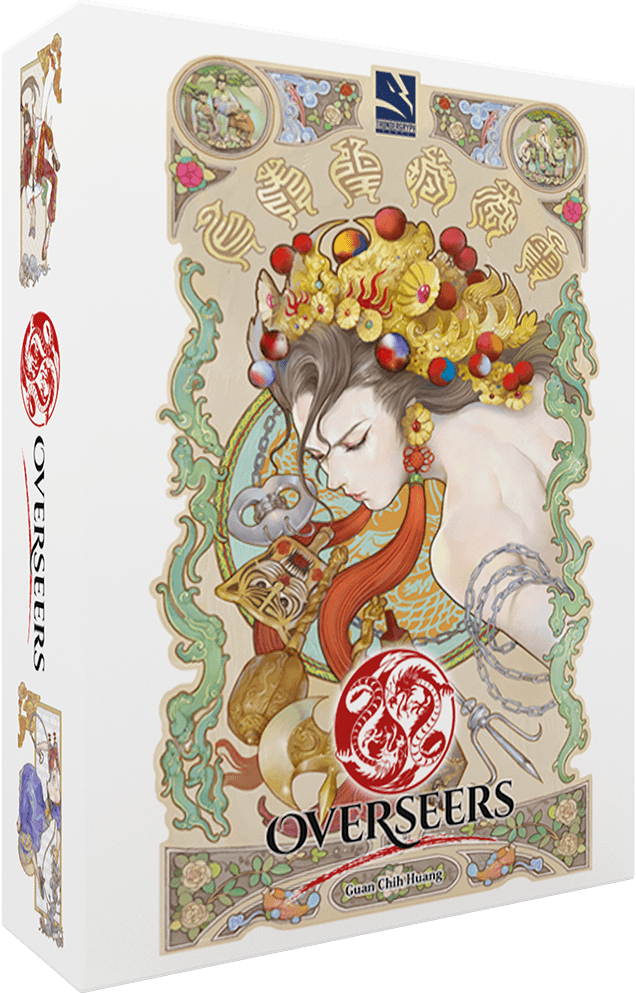 Overseers is a 3 to 6 players fast-paced drafting and bluffing game with a twist.

Each player represents an Overseer, whose objectives are to bend traits to their favour to create the most dominant combination of virtues and vices; you will draft cards to achieve the best possible score and try to deceive your way during the game to convince the others you are not the strongest player.

OVERSEERS ABILITIES
THEY ARE OBLIGATORY: You must use your ability, and that’s why every Overseer is shown before drafting, so you will be able to accommodate your game to your character and try to mess other’s draft by deducing what they could be doing. OVERSEERS ABILITIES AFFECT ONLY THE PLAYER THAT GOT THE CARD: This is very important, every card in the game only affects the player who has them, so if someone steals a card you transformed they will get the original card and not the changed one. The only exception of the later are the Wuming sisters since they are not obligatory per se, because there is a condition that could nullify your opportunity to use them, and they also affect everyone. Finally, we would like to clarify Liang’s abilities. The card text shown: “In the scoring phase, the player of your choice will lose 1 point for each card in their combination”, but in the rulebook “In the scoring phase you can steal 4 points from the player of your choice”. The original ability from the Japanese version was the first one, but we felt it was way too much “bashing the leader”. Sadly, we didn’t have the time to change the card, but we added the new ability on the rulebook. Feel free to play any of the two since both are balanced, but we recommend the latest.
STEALING
As you already know this phase happens before counting the points at the end of the round. The player with most quantity of greed cards will be able to steal a card from another player. The player with the most greed cards will be able to choose the player but not the card, which is extremely important. Since all the cards will be already revealed you can see what each player could give you and make a better choice.
POINTS ARE HIDDEN BUT SHOWN WHEN TAKING THEM
People normally forget this and it is very important. Every player has to verify that everyone picked the right ammount of points before hiding them so they can memorize it to see which player they should try to play against in the next round to get in the lead. On top of that, people can lie about their points after they hide them, so a little late in the game if you didn’t pay attention you might not know how high your score is compared to others and other players might lie to coerce you to do whatever they want, information is key.
THE TOURNAMENT RULES
If you feel like playing an expert mode of the game, you can use these rules: